What a great week! Beautiful weather, bait about as plentiful as it can get and good snook fishing, not a bad way to spend the week before Thanksgiving.

It makes it easy to head out before the sun to catch bait when you know you are to be greeted with a beautiful sunrise and a net full of bait. It’s morning like these that make me realize why I love my job. And as a bonus the fishing was pretty good too!

We concentrated on snook this week and had our best snook fishing of the fall season over the past week, not for numbers of fish, but for size. We caught fish from twenty-eight to thirty-two inches on every trip and on Friday we caught and released one measuring thirty-seven inches. With the slot on snook of twenty-eight to thirty-three inches it’s been a real challenge when customers want a snook dinner, but this week luck was on our side. 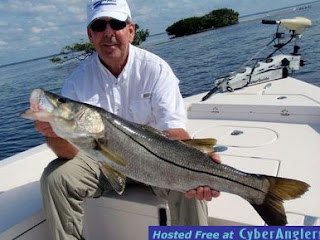 Bill Merrian of Minnesota with the biggest snook of the week measuring thirty-seven inches.

The bite wasn’t on fire, but we were patient and worked holes where I knew there were fish. We would get one or two chances from each hole and more often than not bigger fish, then it was time to move to the next. We were fishing live pilchards and pinfish with the pilchards taking most of the abuse. It seemed like all the larger fish would follow the bait for awhile then blast them on the surface. All the fish even the biggest ones jumped more times than I can remember, the cooler water has really given them a lot of energy.

Although I thought we would catch a few more, we only caught one redfish, but it was a whopper measuring at thirty-three inches. I have been seeing scattered reds around the same holes as the snook, so I really expected a few more. 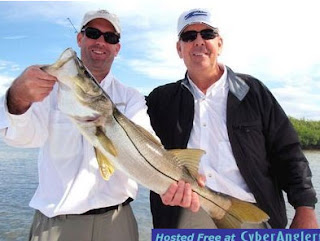 This ones for dinner, measuring in the slot at twenty-nine inches.

We also caught flounder each day and they were good size, big enough for a couple decent filets. They were also caught with the snook on the same baits. Our best bite was on the afternoon incoming tide, we were fishing the northeast side of Pine Island Sound and the eastern shore of Charlotte Harbor near Two-Pines. By the way, I am still seeing a lot of sharks, mostly bulls from four to six feet in these areas. They are cruising the edges of bars in areas where mullet, ladyfish or bluefish are schooling. Haven’t had a chance to fish for them but we might this week.

For charter information contact us at (239)283-7960 or www.fishpineisland.com.
“Catch The Action” with Captain Bill Russell