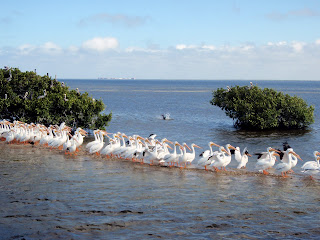 White Pelicans are back from the north 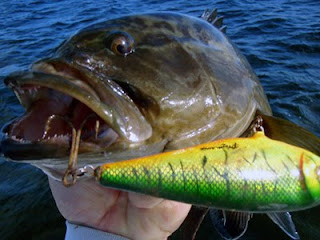 Watching the weather up north on the news I really feel for our northern friends. Looks like lots of snow and very cold miserable weather, while here in Southwest Florida we spent most of the week on the water in shorts and shirt sleeves. Not rubbing it in but I sure wouldn’t trade you places!

It’s mid December and baitfish are still pretty thick, an indicator that so far our weather has been mild for the most. We have had mornings of fog, some wind but nothing really harsh on the weather front. Both shiners (pilchards) and pinfish remain in good supply in Charlotte Harbor near the mouth of Matlacha Pass and Bokeelia, and ballyhoo are mixed in with them. With the water temperature in Matlacha Pass bouncing around sixty-seven degrees one really hard cold front and the bait supply could change quickly.

Hit some submerged boats in the harbor for grouper this week and didn’t quite have the results I expected. We caught grouper but all under the legal size, still a fun fight none the less. Broke one good fish off, but I think the larger fish are still off the beaches and in Pine Island Sound. I have heard reports of some big gag grouper caught while trolling diving lures along the Sanibel Causeway and over ledges off the beaches. I will say the ladyfish were so thick everywhere we tried to catch a grouper that it made it almost impossible to get a bait down, literally dozens swarming your bait.

Snook are still hanging in potholes and holes adjacent to oyster bars, we looked at a few holes with lots of fish of all sizes but with the weak tides and cooler water we chose not to fish for them. Instead we looked for action, which we found with sea trout, Spanish mackerel and of course ladyfish. White quarter-ounce Key Largo buck tails and Bass Assassin white jerk baits where hard to keep in the water without something attacking them for about an hour towards the end of the falling tide. Can’t wait for trout season to open next month, it should be really good with plenty of fish and big ones. I did not see any sharks cruising the bars this week as I had in previous weeks, most have probably headed south.

Again our weather has changed with a north wind and a slight cool down, but it only lasted one day, now it’s warm again. For now it’s back to our sunny warm southwest Florida days. You folks from up north should come on down and enjoy it with us!