This past week we got our first dose of cold weather fishing as we switched from live shiners and pinfish to shrimp. The cold has pushed most of the bait fish to warmer waters to our south so it’s time to switch to shrimp and look alike imitations. The fish we catch usually don’t average as large as when we are live baiting but the action can be very good at times. We fished south Matlacha Pass on a cold day with a strong north wind and caught a lot of fish, not a big variety only redfish and sheepsheads but a lot of them. A couple stops the redfish bite was non-stop, the only problem was they were all less than eighteen inches. Still a lot of fun as long as you’re heart is not set on a redfish dinner. We did however boat enough nice sheepsheads for a good fish dinner. We were fishing small live shrimp on number 2 hooks with just enough weight to keep it on bottom. 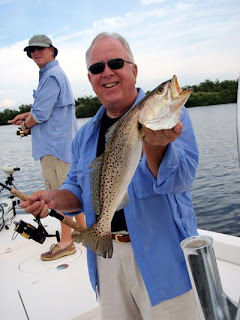 Trout Season is once again open

The next day we ventured to north Pine Island Sound, we had a couple young boys on board and were looking for action not food. We found good action with Sheepsheads, grouper and snapper while fishing shrimp over submerged piles of debris in eight to ten foot depths. A good number of the sheepsheads and snapper were legal size and the largest grouper was about twenty inches, but we had a lot of double and triple hook-ups to keep the boys happy. 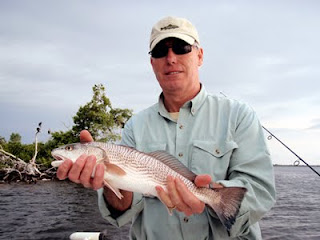 Despite the cold the redfish are still biting

Like a fool we attempted to fish New Years Day and got about an hour of fishing in the books before the rains came. The morning started good, we boated snook on the first two casts then a redfish shortly after followed by a trout. These weren’t huge fish but a good start to the morning. Once the bite died off we began idling to another Island when the weather took a turn for the worst. After waiting about a half hour tucked in the protection of the mangroves to see if it was going to blow over we decided we had had enough. Luckily we stayed close to home due to the uncertainty of the weather so it was a short but wet idle back to the house. 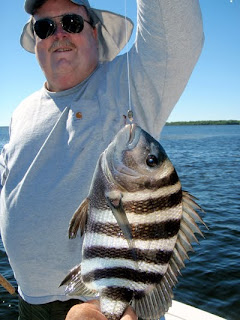 With the cooler temperatures the fish are on the move, for trout look for them in areas where they are protected from the cold north winds. My favorite areas are holes with deeper water than the surrounding areas. This could be around oyster bars, potholes, canals and cuts between Islands and shorelines. Generally when the water is cold they will be most active during the warmest part of the day, so there is no need to be the first one on the water. And probably most important, whether you are using shrimp or artificial, get the bait to the bottom and work it very slow. The colder the water the slower their metabolism is going to be so you need to make it an easy meal for them to catch. My favorite rig to locate fish is a quarter ounce troll rite or jig head with a medium sized live shrimp hooked tail first after biting the end of its tail off with a slow retrieve. 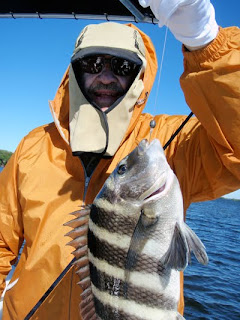 The colder the better for big sheepsheads

If there is one positive to trout fishing when it’s cold they should be easy to locate. With the extreme low tides and limited areas of deep protected waters they should be stacked up when you find them. Sometimes that holds true and sometimes I don’t know where the heck they all go!