I know compared to what’s going on to our north our weather probably isn’t that bad, but with temperatures expected to dip into the low thirties again tonight it really hurts our fishing in sub-tropical southwest Florida.

Its funny looking back to my first couple years of guiding professionally, as a Florida boy I did not like the cold at all. Matter of fact if the high for the day was below eighty degrees I would encourage cancelling the trip. I quickly came to the realization that my definition of cold was far different than those visiting from the north. I would hear comments like “What are you talking about this is the warmest weather we have seen in three months” when I would call the day before to discourage the trip. While I was bundled up with every ounce of cold weather clothes I own they would show up on the dock in shorts and a cooler of beer. It took about two years to adapt and now I always let the customer make the call that it’s too cold for them to fish. 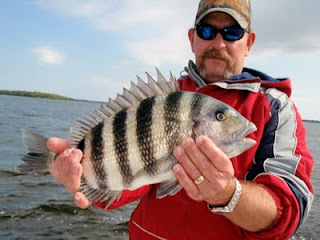 Now, I actually enjoy cold weather fishing, but this week was the exception. I had three charters scheduled and all three of my clients decided it was too cold for them and I had to agree, it was uncomfortably cold most of the week. I did fish on one of the coldest days for about three hours and that was enough. We stayed in south Matlacha Pass, semi-protected from the brutal north wind. We actually caught a good number of fish for the conditions, nothing huge (with the exception of a couple big sheepsheads) but a lot of fish. Fishing small live shrimp on a quarter-ounce jig head around oyster bars we caught small (rat reds) redfish, sheepsheads, a couple trout and lots of ladyfish. With the cold weather even the ladyfish were lethargic; they fought like trout, hardly any jumping or hard pulling. After three hours we were chilled to the bone and had had enough. 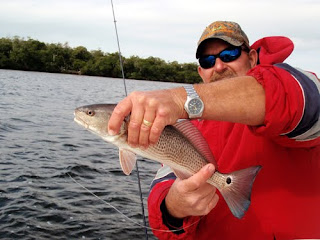 Extended cold weather can be devastating to some of our native species with snook at the top of the list. It’s a natural occurrence and has happened many times going back to my childhood. I have seen massive kills that make your stomach churn. Hopefully this won’t be one of them, let’s hope the damage from the cold is minimal and we will soon get on a warming trend. I don’t mind a few days of cold but so far the start of 2010 has been ridiculous! 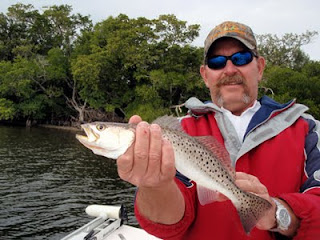 Call today and “Catch the Action” with Captain Bill Russell