We just can’t seem to get a week in the books without weather becoming an issue. The record breaking cold is well behind us, however summer like rain over multiple days and wind crippled anglers much of the week. Over the few days of favorable weather there were reports of trout and sheepsheads and a few hungry redfish.

Trout reports were widespread with reports coming from the eastern shore of Charlotte Harbor in northern Matlacha Pass and throughout Pine Island Sound. All areas held one common factor; the best fishing came to those that stayed on the move, either drifting or via trolling motor. Once a fish was hooked up, dropping anchor and working the area usually had good results, then when the bite stopped continued to move. In Matlacha Pass from Bear Island to Smokehouse Bay held fish, on either side of the Burnt Store Bar between Burnt Store Marina and Two Pine’s in the Harbor and in the Sound from Big Jim Creek to Useppa Island up north and the flats outside Tarpon Bay and north of the power lines on the Sanibel side in the southern Sound. 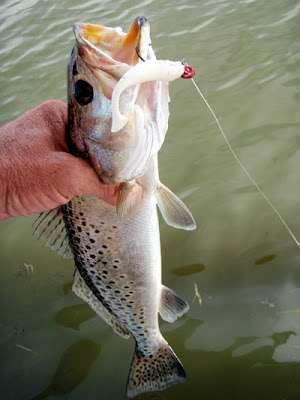 The fish are averaging about fourteen to sixteen inches in length with about half making the fifteen inch legal size. Bait choices included shrimp under a popping cork, four inch soft plastics in a shrimp pattern attached to an eighth-ounce jig head and fished below a popping or Cajun thunder cork and white or chartreuse shad tails on a quarter-ounce jig head with a moderate jigging retrieve. Fishing grassy bottom with patches of sand in four to six feet gave the best results for action with both trout and lot’s of ladyfish. Potholes and gradual drops along the various long sand bars also held good numbers of fish, with trout in these areas averaging a little larger.

Sheepshead fishing was decent, but not what it should be. We are in the height of our inshore sheepsheads fishing and it should get much better anytime. Anglers mainly focused around docks and structure in the Sound and around the Passes. Docks inside Blind, Redfish and Captiva Passes held fish with some larger sheepies up to five pounds caught. For rigging a small live shrimp with the tail cut off and a half ounce egg sinker rigged to allow the line to freely slide when a fish picked up the bait was the best way to outwit the known bait stealers. Black drum up to twenty-five inches and a few good redfish were also caught under the docks. Shore bound anglers caught sheepsheads from the Sanibel and Bokeelia fishing Piers and the Matlacha draw bridge. They also hooked into a few black drum as well as trout and Pompano.

I have noticed fish in general getting much more active over the week and ladyfish invading our waters again. They can often become a nuisance but after the cold they disappeared and I kind of missed them. Also beginning to see bonnet head sharks cruising along the bars, they are averaging about three feet and a good sign the waters are warming. A couple weeks ago to catch a trout the bait needed to move really slow, this week we found soft plastics getting hammered as soon as they hit the water or with a moderately paced retrieve. All these are signs pointing to what could be good fishing in the upcoming weeks.