We found a good variety of fish this week around Pine Island and southwest Florida and pretty good action. We usually start each day with the question, Do you want action or do you have an intended species you want to target? Most anglers opt to start the day looking for action and I always encourage this when kids are on board. This week the “action” was good with a variety of species, most caught from the same areas. 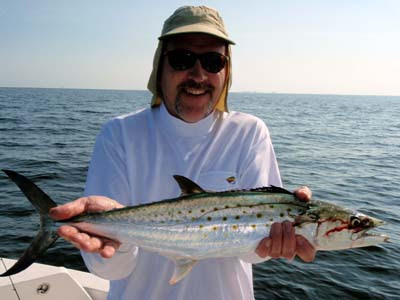 Shiners (pilchards, white bait) have come pretty easy lately, so we have been loading up the live well to allow for chumming to get the fish going. Large Spanish mackerel were abundant all week in Charlotte Harbor near Bokeelia and in the northern end of Pine Island Sound. With the mackerel, big ladyfish moved in at times so thick we needed to relocate to get away from them. We also caught bluefish, jack crevalle, sharks, trout and broke of a couple cobia. When mackerel fishing the deeper inshore grass flats you really don’t know what you might hook next, that makes it fun. 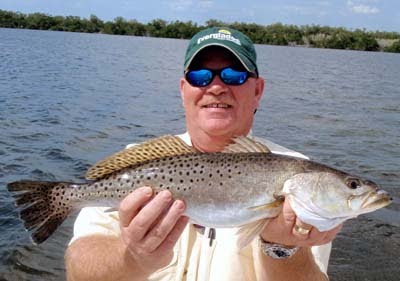 Trout fishing was good with most of the fish averaging fifteen to eighteen inches with a few over twenty up to twenty-two inches. We found the school size fish over a grass/sand bottom mix in six to eight feet of water and the larger specks in potholes and around the perimeter of oyster bars. Over a couple days we caught a lot of trout mixed with the mackerel. 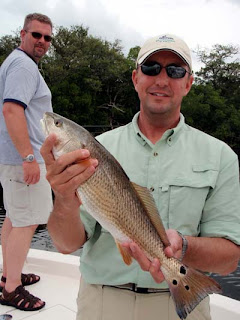 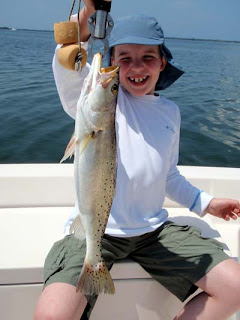 We did not have much high water to work the shorelines this week but we managed one or two redfish each day we gave it a try along with an occasional snook. We actually had two days with anglers managing a slam of snook, redfish and trout. The redfish were in the mid to lower slot and our largest snook was guestimated at thirty inches. We really haven’t been measuring snook but instead removing the hook, snapping a quick picture (if requested) and quickly getting them back in the water to ensure a healthy release. 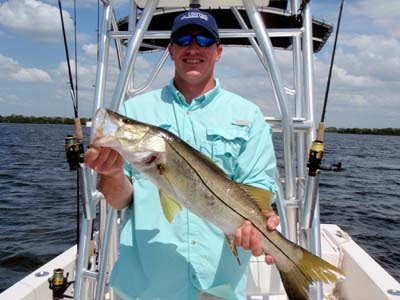 Over the week I sighted a few dozen tarpon spread out in singles and pairs in sand potholes in the Sound. They were laid up motionless absorbing the mid day sun, with the water warming more will arrive each day. Also spotted a good number of sharks from four to seven feet cruising the flats and we hooked a few up to four feet mackerel fishing along with a couple cobia that broke off. Several schools of large jack crevalle are cruising the bar edges in the upper Sound, these fish are ten pounds plus and never fail to amaze me with their fighting ability. 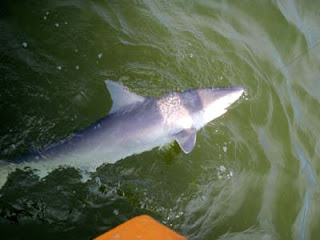 It’s great to see the large fish filtering into southwest Florida; it’s time to keep a heavy rod loaded and ready for any opportunity that comes along.