Although our primary target was tarpon almost all week we ended up catching a lot of different species in the waters around Pine Island including one unexpected surprise.

Over the week we caught tarpon in Charlotte Harbor to our north and off the beaches of Ft. Myers and Sanibel to our south. Over a couple mornings we located large schools of happy fish in Charlotte Harbor without another boat in sight. You know it’s gonna be a good day when the first bait that hits the water gets crushed instantly, that was the case on one morning in the Harbor, we boated three tarpon and one cobia before ten o’clock. Fishing was best with large Atlantic thread herrings until mid morning then cut ladyfish was a better choice in the afternoons in the Harbor. 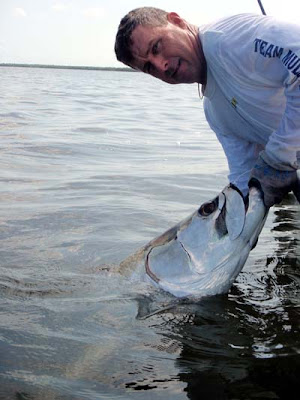 Off the beaches tarpon were eating the large live herrings off and on throughout the day. On our best day we boated four and lost count of how many got away. Other boats anchored up and fishing cut baits on bottom were also putting a lot of fish in the air. Hammerhead and blacktip sharks were constantly harassing our baits and we watched a boat next to us hook and land a big king mackerel around forty pounds that took their tarpon bait. Light winds have made it very calm off the beaches until the afternoon sea breeze kicks in. 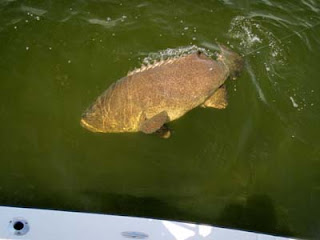 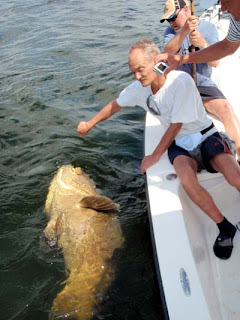 Our surprise catch of the week and maybe of the year was a huge goliath grouper that took a cut bait in open water near Bokeelia intended for tarpon. This guy hit in less than eight feet of water and just kept going almost spooling a Shimano TLD 25 before we could pull anchor and chase it down. Of course we were only using forty pound line with eighty pound leader so we weren’t exactly geared for giant grouper. There was no structure to find so he had to fight in open water and fight he did for about thirty minutes before he tired. I was fishing a group from Denmark, they like to catch big fish and this was by far the biggest fish they have seen. 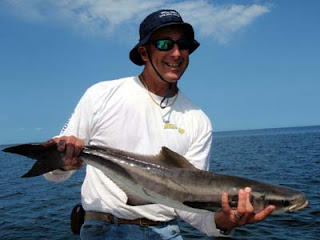 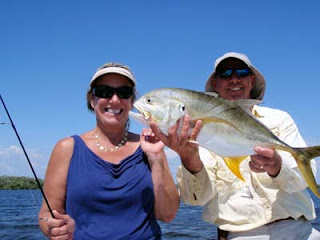 With a week consumed with tarpon fishing I had one day in the middle with a couple that just bought a house in Bokeelia and wanted to learn the area and catch fish. We stayed between Matlacha and Bokeelia and found great action on Spanish mackerel, bluefish, sharks and really nice trout on the morning incoming tide, then found a school of big jack crevalle and a few snook near Matlacha on the falling tide. It was their first time fishing around Pine Island and they were amazed at how many fish and different kinds they were catching. It was a good day with lots of fish and action, but I told them it’s not always like this, although I wish it was.