I don’t know if fishing could have been any better over the past week around Pine Island in southwest Florida. We found tarpon plentiful and more than willing to eat, sharks of all sizes plus all the big mackerel, bluefish and trout you wanted to catch. 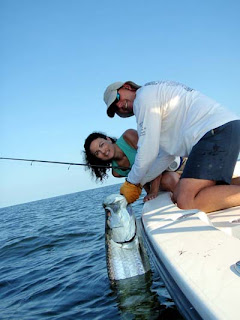 We stayed close to home for tarpon and fished the northern end of Matlacha Pass and Charlotte Harbor and found plenty of fish and there was never more than one other boat in sight. What a different animal when they aren’t pressured or over run by boats, these fish were happy and hungry. We jumped or boated fish from seventy to one hundred fifty pounds all on large live thread herrings. 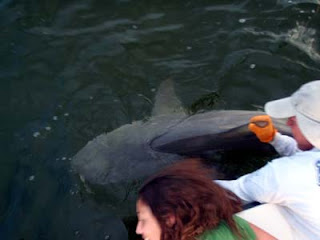 Sharks are everywhere and eating everything. They can be nuisance tarpon fishing, the smaller ones we generally land but they destroy the fluorocarbon leader and the big ones generally chew through the leader during the fight. However when we have been fishing the deeper flats for mackerel and trout we have been putting out a shark rig. I don’t think it ever took more than ten minutes before a big chunk of ladyfish suspended below a balloon was eaten by a shark of some size. Most are blacktips from three to five feet; our largest was a seven foot lemon. All great fighters. 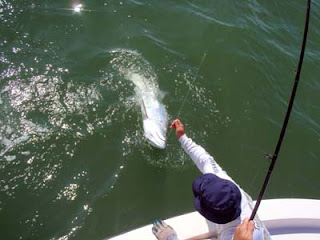 After the tarpon bite slowed by late morning is when we were switching gears and targeting mackerel, trout, bluefish, sharks and whatever else would bite. Chumming with crippled shiners would get the bite started then it was non- stop action on free lined shiners or threads. I intended to spend a little time looking for snook or redfish on a couple days on the high water but the bite was just too good on everything else to break away. 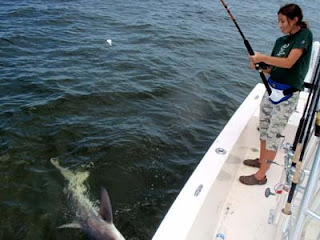 It was one of those weeks were everything went according to plan, that seldom happens on a given day let alone for the better part of a week but luck was on our side. I hope the bite remains strong through the upcoming week, the tides aren’t as favorable after mid week but I am optimistic that there will be plenty of fish willing to chew.